I’ve been going on about overnight oats to pretty much everyone I know for ages. and its finally paying off. Slowly but surely, people I’ve recommended them to have come round to the idea of cold but creamy porridge-like oats that you bung together the night before.

My current favourite way to eat them is cake inspired – lemon curd and poppy seeds, but to be honest, you can add any toppings you like.

END_OF_DOCUMENT_TOKEN_TO_BE_REPLACED

When I started this blog I set myself a list of foodstuffs to tackle, and crumpets were on that list.

Crumpets are probably one of my favourite foods. I’m of the ‘butter only’ school of thought where more is most definitely more. The best part about eating crumpets, I think, is wiping up the pool of butter that has soaked through the crumpet with the last part of the edge. Yummy.

Now, crumpets are the kind of thing that I’d never really though to make until recently. I’d pretty much assumed that they were really difficult and involved lots of yeast related prep – not my forte at all.

The good news is that Crumpets are actually really easy to make! They just involve popping all the ingredients in a bowl, giving it a quick stir and leaving it in a warm place for an hour or so.

The slightly more fiddly bit comes when you cook them. Now a sensible person would think to buy crumpet rings before trying to make crumpets. It turns out that I am not that person.  My first thought was to use a round, metal, un-crimped cookie cutter. The problem is that in my extensive collection of cookie cutters there were almost none suitable. Not deterred, I ended up using a pretty big cake ring.

This increased the cooking time from the recipe significantly. Now, I’m not necessarily advocating  using a big cake ring is you have crumpet rings or something similar, but honestly, there is nothing more satisfying as eating a crumpet as big as your own face!

So go forth and make enormous crumpets – you know you want to!

2. Warm milk (until it feels warm when you pop your finger in) then add cold water to it. Beat into the dry ingredients and try to get it nice and smooth

3. Leave it somewhere warmish for up to 2 hours. It will rise and then fall back, leaving a mark on the bowl if you miss the rise.

5.  Meanwhile, grease your cake tin ring well with oil, and get a frying pan hot. Brush with enough oil for it not to stick.

7. Cook for about 10 mins until filled with holes. Flip over, remove ring and cook until bottom is browned.

8. You can eat them straight away with butter, or toast them later on!

END_OF_DOCUMENT_TOKEN_TO_BE_REPLACED

When I bought a jar of lime marmalade in January 2013, I didn’t a think that it would sit in the cupboard for quite this long. 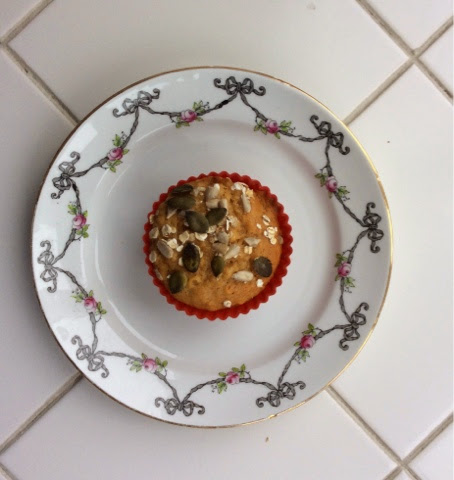 So, when I saw a recipe for marmalade filled muffins I jumped at the chance to finally get stuck into the jar.

END_OF_DOCUMENT_TOKEN_TO_BE_REPLACED

These tasty apple fritters were inspired by this recipe from A Cozy Kitchen.

They helped to use up a big bag of apples kindly given to me by my Granny and Grandad, but also were bloomin’ delicious!

If you fancy a fruity, pancakey start to your day you could do a whole lot worse.